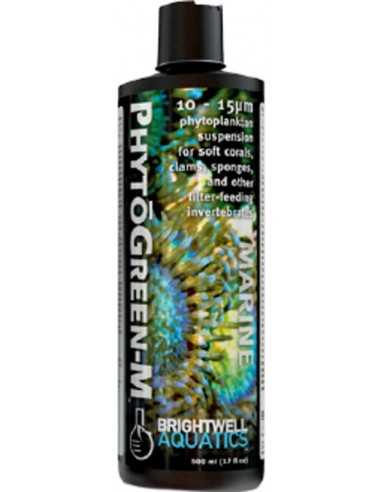 Brightwell Aquatics PhytoGreen-M provides phytoplankton ranging in size from 10 - 15µm, ideally-sized for many soft corals, clams, sponges and other filter-feeders.

Broadcast Feeding: Add up to 5 ml per 189 L of water in the entire aquarium system in an area of rapid water movement daily for the first four weeks of use; thereafter, the dosage may be increased as desired.

Notes: Add no more than 5 ml total of liquid food suspensions per 189 L of water in the entire aquarium system daily for the first four weeks of use; thereafter, the dosage may be gradually increased as desired. Starting out at a low dosage and gradually increasing it with time will allow the biological filtration in the aquarium to adjust to the increase in nutrients and prevent water quality from deteriorating.


Technical Background
Brightwell Aquatics PhytoGreen-M is a concentrated suspension of Tetraselmis sp., a unicellular marine algae ranging in size from 10 - 15µm and having a relatively high amino acid content compared to many other species of phytoplankton; it is also quite rich in the omega-3 fatty acid EPA, as well as in Chlorophyll A. Tetraselmis falls within the size class of plankton known as nanoplankton (2.0 - 20.0µm), which is sometimes considered microplankton. It is the proper size for feeding many species of soft corals (particularly those with short tentacles), as well as clams and other bivalves, sponges, tunicates (sea squirts), plumed worms (Christmas tree worms, feather dusters, etc.), and larval invertebrates such as those of many bivalves.

Though Tetraselmis provides a number of amino acids, one that is not naturally present has been added to PhytōGreen-M; this proprietary amino acid has been shown in studies to increase coloration of corals and other marine invertebrates. Additionally, a small percentage of vitamin-C is present to increase the benefits of PhytōGreen-M, particularly to corals and their allies that have recently undergone fragmenting or propagation.
PhytoGreen-M may be used in conjunction with other planktonic suspensions to provide a complete range of sizes to filter-feeding and planktivorous organisms.

Food Rotation: Foods for corals should be rotated to provide variety and a more complete nutritional profile.  Brightwell recommends that you don't just mix all your foods together and feed the same thing every day.  Feeding a broad range of nutrients will more closely simulate what animals encounter in their natural habitat.  Do some research on your animals to see what their nutritional needs are.  Brightwell makes a number of different planktonic and particulate foods that can be rotated to provide a more balanced diet.  These can be fed in addition to the CoralAmino and Restor which can be fed every day along with those foods.  Some of them are: PhytoGold, PhytoGreen, Zooplanktos and Reef Snow.

Caution
Keep out of reach of children. Not for human consumption.