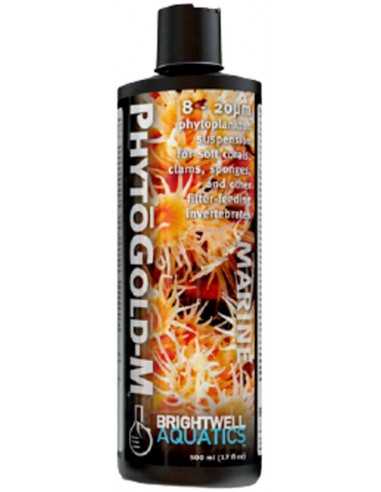 Brightwell Aquatics PhytoGold-M provides phytoplankton ranging in size from 8 - 20µm, ideally-sized for many soft corals, clams, sponges and other filter-feeders.

Broadcast Feeding: Add up to 5 ml per 189 L of water in the entire aquarium system in an area of rapid water movement daily for the first four weeks of use; thereafter, the dosage may be increased as desired.

Notes: Add no more than 5 ml total of liquid food suspensions per 189 L of water in the entire aquarium system daily for the first four weeks of use; thereafter, the dosage may be gradually increased as desired. Starting out at a low dosage and gradually increasing it with time will allow the biological filtration in the aquarium to adjust to the increase in nutrients and prevent water quality from deteriorating.


Technical Background
Brightwell Aquatics PhytoGold-M is a concentrated suspension of Thalassiosira sp., a unicellular marine algae ranging in size from 5 - 20µm and having a diverse nutritional profile; it is rich in the omega-3 fatty acids ARA and DHA, as well as in several important amino acids. Thalassiosira falls within the size class of plankton known as nanoplankton (2.0 - 20.0µm), which is sometimes considered microplankton. It is the proper size for feeding many species of soft corals (particularly those with short tentacles), as well as clams and other bivalves, sponges, tunicates (sea squirts), plumed worms (Christmas tree worms, feather dusters, etc.), bryozoans, larval invertebrates such as those of many crustaceans and bivalves, and juvenile fishes.

Though Thalassiosira provides a number of amino acids, one that is not naturally present has been added to PhytoGold-M; this proprietary amino acid has been shown in studies to increase coloration of corals and other marine invertebrates. Additionally, a small percentage of vitamin-C is present to increase the benefits of PhytōGold-M, particularly to corals and their allies that have recently undergone fragmenting or propagation.
PhytōGold-M may be used in conjunction with other planktonic suspensions to provide a complete range of sizes to filter-feeding and planktivorous organisms.


Caution
Keep out of reach of children. Not for human consumption.

Be the first to write your review ! 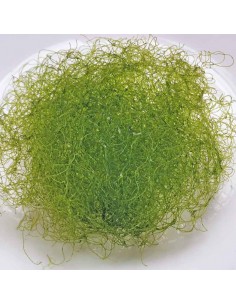 29 Review(s)
£9.95
Our medium thick Chaeto / Chaetomorpha algae species offers the fastest growth rate and is a perfect choice to lower nitrate and phosphate levels in the marine aquarium. As it grows much faster than the thick Chaetomorpha which we offer too it will need a minimum nitrate level of 2-3 ppm, otherwise it may starve and struggle.  We have a palatable Chaeto...
View 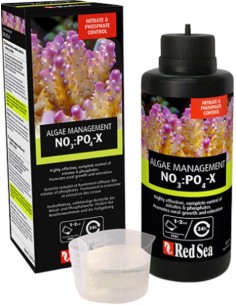 1 Review(s)
£8.87
Red Sea NO3:P04-X or NOPOX is the most popular solution for a controlled nitrate and phosphate reduction in the marine aquarium setup, for an improved coral growth and correct nutrients level to keep macroalgae but avoiding unwanted micro algae in any reef or marine fish system.
View 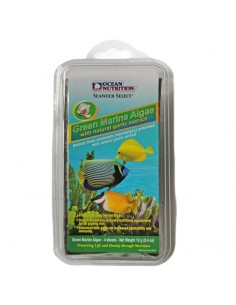 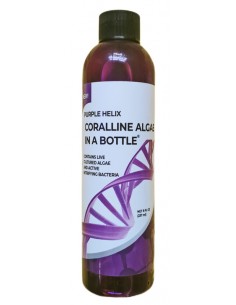 Purple Helix Coralline Algae In A Bottle - Pre Order only

0 Review(s)
£29.95
Purple Helix® Coralline Algae includes, as oppose to most available coralline algae supplements, 8 species of live coralline algae spores of Purple, Magenta, and Lavender. along with beneficial nitrifying bacteria. There is no faster way to turn your bare rocks into beautiful and coralline encrusted live rock. Purple Helix pre-order is now closed for...
View
Tap to zoom
You need to login or create account