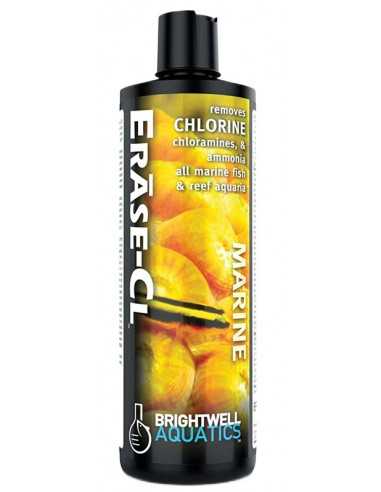 Brightwell Aquatics Erase-CL removes Chlorine, Chloramines, & Ammonia in the Marine, Reef, and Freshwater Aquarium.
May be used to neutralize iodine in the event of an aquarium overdose. Free of phosphate and silicate.

To Treat Tap Water
Add 5 ml (1 capful) per 189.3L of tap water to remove chloramines and ammonia; used in this fashion, Erase-Cl will treat up to 6 ppm chlorine, 3 ppm chloramines, or 1 ppm ammonia.

Testing for Ammonia
When using this product, be sure to measure ammonia with a test kit featuring ammonia salicylate reagent rather than Nessler’s reagent; Nessler’s reagent will give an incorrect positive reading of ammonia due to the manner in which the reagent interacts with the active components of Erase-Cl.

To Treat Free Iodine Overdose
If you suspect that iodine has been overdosed in an aquarium (such as due to accidental misuse), add 10 ml (2 capfuls) Erase-Cl per 151.4L in an area of energetic water flow; doing so will neutralize free iodine (i.e. that which is not in an ionic form, such as iodide or iodate, or in a bound form).

Observe aquarium livestock for no less than 15 minutes thereafter. Erase-Cl binds iodine at a rate that is limited only by the response time and degree of water circulation in the aquarium; the faster the product is added after an overdose and the more rapid the water circulation in the system, the better the product will perform. No claim is made that this product will prevent damage or reverse that which has already been suffered by livestock or biological filtration in any event. This product is particularly useful for hobbyists who are experimenting with Lugol’s Solution and other strong iodine sources in an attempt to benefit aquarium inhabitants. Do not exceed a total iodine concentration of 0.10 ppm in a marine aquarium at any time.

Technical Background
Erase-Cl may be used to prepare water for use in aquaria (such as when performing water changes or replacing water lost to evaporation), as well as during periods of time when the concentration(s) of ammonia and/or nitrite become measurable (ammonia and nitrite concentrations should remain immeasurable in established aquaria with mature biological filtration, except for periods when new livestock are added to the system or the concentration of dissolved organic material has increased for some reason). Erāse-Cl is not meant to be considered a substitute for maintaining adequate filtration equipment/methods or the care thereof, however it can be utilized as needed in the prevention of ammonia or nitrite from irritating sensitive aquarium inhabitants. A balanced aquarium is one in which the rate of organic material input to the system is matched by the removal rate from filtration methods; it is natural for a system to become unbalanced for short periods of time after adding new livestock, disturbing the biological filtration, changing feeding habits, etc., however the system should fall back into balance again within a period of days. If concentrations of ammonia or nitrite are persistently-measurable with a quality test kit, test the source water (i.e. tap water or water from the purification unit (if applicable)) for these substances. If they are not present, reducing the rate of organic material input, increasing the filtration capacity, or even moving the inhabitants into a larger system may be warranted. Chronic levels of ammonia and nitrite can gradually weaken fish and invertebrates, often leading to illness and potentially death.

Erase-Cl immediately binds iodine in the event of an overdose (typified by “drooping” and rapidly decaying tissue of corals, clams, their allies, and other sessile invertebrates, as well as erratic behavior and/or death of fishes and motile invertebrates), decreasing the potential for damage to livestock and the beneficial microbes that constitute the biological filter.

Note: It is strongly recommended that hobbyists administering Lugol’s-type iodine supplements (which are typically extremely strong) to reef aquaria have a bottle of Erase-Cl on hand at all times, in case of accidental overdose.


Caution
Keep out of reach of children. Not for human consumption. Contact poison control center if ingested.