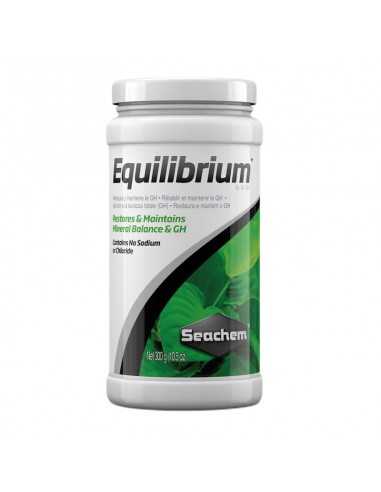 Seachem Equilibrium™ is specifically designed to restore and maintain the ideal mineral balance in the planted aquarium. It does not contain sodium or chloride, which can be detrimental to a planted aquarium at elevated levels. Equilibrium raises the essential mineral/electrolyte content (General Hardness) of the water to balance with and promote stability of the carbonate hardness.

Unlike many other products, Equilibrium™ contains no Sodium Chloride. Both sodium and chloride are not rapidly depleted elements in a planted aquarium, and, in the case of chloride, can do more harm than good. Competitors’ products generally contain primarily sodium chloride (because it is inexpensive), which will raise the electrolyte levels for fish, but can be detrimental to plant growth. In addition, sodium is not a contributing cation to GH levels. Equilibrium™ contains only calcium, magnesium, and potassium salts, which aid in fish metabolism, but are also highly beneficial to plant / macroalgae growth. Equilibrium™ guaranteed analysis and symptoms of deficiency

Dosage
To raise mineral content/general hardness (GH) by 1 meq/L (3 dH), add 16 g (1 tablespoon) for every 80 L  when setting up an aquarium or when making water changes (add to new water). For optimum solubility we recommend mixing with 1 L  of water (the resulting mixture will have a white opaque appearance). When this mixture is added to the aquarium it will impart a slight haze that should clear within 15–30 minutes. HINTS: Do not use Equilibrium™ when replacing evaporated water. This dose is based on DI or RO water; for other water, measure hardness (GH) first, then add according to need.