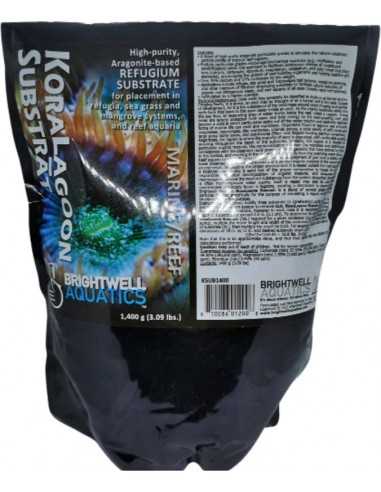 Brightwell Aquatics KoraLagoon is a blend of high-purity aragonite particulate grades to simulate the natural substrate particle profile of tropical reef lagoons. We recommend this substrate particularly for macroalgae like Halimeda Incrassata, Udotea Flabellum and similar marine algae species, seagrass and mangroves for an improved growth.

Applications include refugia, sea grass and macroalgae bed systems, mangrove systems, and other methods of filtration employing substrate to facilitate natural reduction of organic and nitrogenous waste, and reef aquaria of all sizes (notably nano-reef systems).

Instructions
If desired, briefly briefly rinse substrate in (preferably) purified water prior to placement in aquarium system to remove dust. KoraLagoon Substrate may be employed in a number of applications, however in each case it is recommended that the total depth of substrate not exceed 2.0 in. (5.1 cm). To determine the approximate amount of KoraLagoon Substrate (lbs.) required for a given container (e.g. aquarium, refugium, or sump), multiply the inside length and width of the container (in.) by the desired depth of substrate (in.), then multiply the result by 0.05. Note that final results may vary slightly from calculations performed.


Technical Background
Coral reefs may generally be classified as Atolls or as Barrier and/or Fringing Reefs; in a sense, an atoll may be thought of as a barrier reef in the later stages of development, for it is the subsidence of the land mass around which fringing and barrier reefs form that leads to the open water inside an atoll. As the interior landmass sinks into the sea floor, an expanding area of water forms inside the reef, called a Lagoon. These areas are largely protected from wave and tidal energy by the ever-growing reef, and become a zone in which particulates settle out of the water column and relatively-delicate forms of marine life can exist and reproduce. Organisms found in lagoons are primarily seagrasses, macroalgae, disc anemones, colonial polyps, a wide variety of soft corals and large-polyp stony corals, and detritivores (filter- and deposit-feeding detritus consumers). Regardless, the lagoon is where the majority of sand is deposited, with particulate grading occurring throughout the depth of the substrate. Similarly, the lagoon is a deposit for particulate organic material, the remineralization of which (by microbes and detritivores) corresponds with the observed rapid growth of the organisms that have evolved to thrive in this habitat, and resulting in the depletion of nutrients from the overlying water column. Reef aquaria can benefit tremendously from the employment of just such a system, with lower observed amounts of particulate and dissolved organic material in the system being an end-result. By creating the proper environment in a vessel outside the main aquarium, a hobbyist can employ a sand bed of the proper composition to house the bacteria responsible for initial decomposition of organic material, and seagrasses and/or macroalgae to remove the resultant substances from the system altogether; the end result is often much-improved water quality. Such a vessel may also be used to house invertebrates commonly found in lagoons, creating a microcosm to observe and enjoy. Brightwell Aquatics KoraLagoon Substrāt is a blend of several grades of aragonite particles created specifically for the purpose of emulating a lagoon environment. It is ideally-suited to this purpose.

Be the first to write your review ! 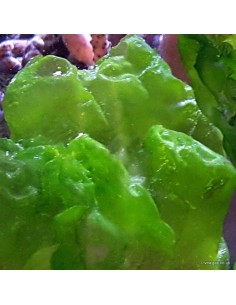 8 Review(s)
£6.95
Ulva Lactuca or often called Sea Lettuce is a very palatable macroalgae which makes it a great natural food source for herbivore fishes like Tang & Foxface. With its thin leaves in different green shades it will look just amazing in any reef tank whilst offering a natural grow place for copepods and rotifers. Use with caution in oral reef tanks. Not for...
View 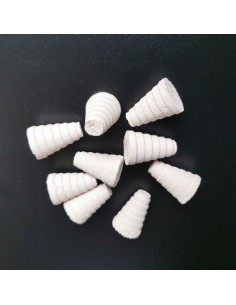 0 Review(s)
£0.40
Ceramic cone frag plugs, great to keep small macro algae species in place which will not attach themself as well for the fragging & propagation of hard and soft corals.  Requires no curing and can be used straight in your tank
Tap to zoom
You need to login or create account